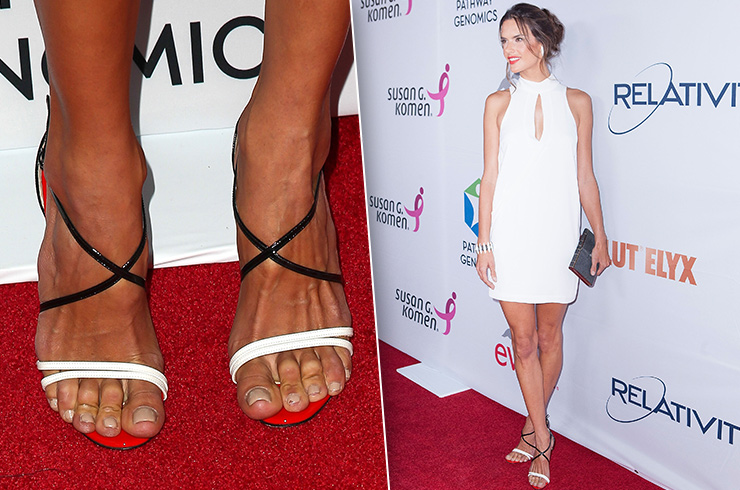 Stars can be understood: a tight schedule , constant flights , the lack of a normal mode and a lack of time to , to relax in the beauty salon … clearly only one thing – a love of open sandals , which show celebrities , showing unsightly pedicure in contrast to the elegant shoes.

One could say , that the “angel” Victoria’s Secret is perfect from head to toe , but the latest came out a small hitch. Generally , Nude – a versatile option for those , who want to do a pedicure and forget about it for a couple of weeks. However, Alessandra clearly passed with this coating – chips formed on the varnish.

Not the worst pedicure , but we don’t want to immediately hurt your psyche. Another issue , that the release of Selena chose a very simple version: it seems , that the singer was not prepared for the event.POPULAR

At least Selena has varnish on her legs , but the Madonna sometimes appears in front of the paparazzi without it at all. Nail pop diva say , they are tired of uncomfortable shoes and a bright coating. Probably , Madonna decided to give them rest , and at the same time to air during a secular exit.

Brr! We do not believe , that the actress entered the carpet , seeing , what is happening with the fingernail on the big toe of the left foot ( cleavage exposing not only the thickness of the coating ,but also the advanced age of the pedicure ). We hope , that immediately after the triumph of the star found time to go ” on nogotochki”.

Anything criminal happens: nails may become deformed , if the owner is often a narrow uncomfortable shoes. And it is not immediately possible to detect , if the plate is covered with a bright thick layer of shellac. However, in the case of Claudia , everything secret became clear – which , as we see , was not hidden from the public.

Littlefinger is obviously impatient to get a pedicure soon! It would seem , it is all relatively bearable , but a yellow tinge to the skin around the nail plate clearly indicates , that it is time to process the cuticle.

Black and white pedicure – a case , when even regrown nails barely noticeable. Perhaps , this was the reason , that Kim fingers look unkempt , but everything seems fine at first sight.

Nervous to viewing is not recommended! It is unlikely that Kara worked in the fields with bare feet for a month without the slightest access to civilization … Either the rebel really doesn’t care about the opinion of beautyigolics , or the model simply forgot ( it happens!) To put her nails in order.